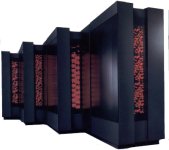 The Connection Machine acts as the Park's Central Computer.

The system has to be rebooted before that Park's security systems and phones will work.

The lights flash just like they do normally, although it's hard to understand why a theme park needs a supercomputer..

They would need it for DNA sequencing and protein folding etc as you can never have too much computing power when dealing with those type of problems. Though running the phones though the super computer would is not very realistic as there are special purpose PBX systems for those tasks that even back then.
2009-04-22 18:37

The thinking machines are only referenced twice in speech.. once by the welcome video and another time by dennis nedry when him and john hammond and are arguing over his salary lol!
2009-08-19 21:40

The thinking machines are only referenced twice in speech.. once by the welcome video and another time by dennis nedry when him and john hammond and are arguing over his salary lol!
2010-03-22 08:27

I know it's a plot device, but I can't imagine why you would have EVERYTHING, including the lights, electric fences, door locks, etc. run by a computer, not to mention a single computer. Especially when you're trying to keep man-eating dinosaurs contained!
2017-07-26 13:02

As I remember there is a SPARCStation with an important role. The little girl is the only who can use it and she locks the doors. Simply by navigating thru the visual file system.
2012-10-18 12:04

It's very understandable why they might have supercomputers..they would definitely use them for the DNA sequencing etc, and maybe once they upgrade, they retire the slightly older models to the control centre to use with fences, phones, vehicle control etc
2013-02-10 15:48

Protein folding needs a bit more than just a Macintosh Quadra 700. The CM-5 would have served a vital role for their development, and it replaced the then-dated Cray X-MP that was mentioned in the book
2013-04-22 17:04

While a CM-5 would have been a suitable machine for the DNA work, I have it on good authority (from a former "Thunko") that what was used in Jurassic Park was only the decorative front panel of a CM-5. Also, Nedry's comment about networking multiple connection machines was inaccurate: these machines were designed to be linked (hence the name) and such talent was far from rare in the industry.
2013-12-12 08:07

I believe it was actually the SGI machine on Nedry's desk that was running the park, and needed the reboot, not the CM-5s. I think the CM-5s were supposed to be dedicated to gene sequencing.
2015-01-08 01:08

This computer is explained a lot more in the book. It is actually an important plot point that drives part of the story.
2020-10-10 20:29

@cmc The book describes the park systems as being controlled by three Cray X-MPs, not shown in the movie. It makes no mention of CMs or other Thinking Machines.
2021-12-16 01:35

The Thinking Machines CM-5 would be used to run park functions like rides, security, phones etc as well as laboratory computers and simulations of DNA and other complex calculations and graphic information. Basically this system is used like the 2 CRAY XMP supercomputers showing working in the lab, and the other CRAY XMP ran park functions like rides, phone systems, security etc.
2022-05-27 11:19

In reality, a Thinking Machines CM-5 was not capable of protein folding. Computers have only recently been able to achieve that. However this is not reality so one need not have a specific purpose for a supercomputer, but one does need on in the plot. As already noted, it would have been overkill for controlling the park's functions. More reality: The CM-5 was a terrible supercomputer. It was released in 1992-1993 and Thinking Machines folded in 1994. But is was photogenic, with lots of blinking lights. Sexy machines with lots of blinking lights are much better suited for cinematography. It was a great choice for the movie. P.S. One reason Thinking Machines folded so quickly was that Cray (of the CRAY X-MPs in the book) released the CRAY T3D in 1993. It was the fastest supercomputer for running many real-world simulations, such as crash analysis, chemistry, structural analysis... But it was housed in a boring box and looks counted.
2022-09-22 18:44